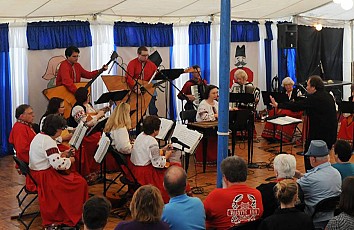 The St. Nicholas Balalaika Orchestra had its first beginnings in August 1985 under the auspices of St. Nicholas Orthodox Church. Being the first of its kind in the area, it quickly developed in to a well-skilled instrumental ensemble that has brought about a revival of interest in the technique of playing the balalaika. The orchestra members are all amateurs of all ages and from all walks of life, participating entirely because of their love of music, their interest in Russian instruments on which they perform, and the pleasure they receive from playing together.

Their director, Mary Jane Malackany, is originally from Mckeesport, Pennsylvania. She studied under Father Dimitri Ermakov in Mckeesport and played with the Balalaika Strings of Western Pennsylvania. She is an active member of the Balalaika and Domra Association where she sits on the board of directors, an energetic church and community volunteer, as well as a wife and mother of four adult children and grandmother of two.

Here are a few highlights from the orchestra's 35+ year history: Performances with symphony orchestras, the Cleveland Museum of Art, the Balalaika and Domra Association of America Conventions, Russian Brotherhood Organization Conventions, concerts and a host of prestigious festivals and cultural events. Most recently, the orchestra had the honor and privilege of hosting the 2015 and 2006 International Convention of the Balalaika and Domra Association of America in Akron, Ohio.